The Glossary Ibis:
A Dictionary of Birding Jargon

Chaser:
1. A womanizer.
2. Someone who will travel relatively extreme distances in order to see birds.
3. See Lister, Twitcher

Green Birding:
1. A manner of birding where priority is given to lessening one's carbon footprint; ie by foot, bicycle, or public transportation.
2. Birding where you focus on your local patch.
3. Birding where chasing or twitching is more or less discouraged.
4. The realm of the 'holier than thou' crowd, who proclaim their superiority over listers and chasers. See Sour Grapes.

GPS:
1. Acronym for 'Global Positioning System'
2. A device that permits navigation to and from birds even when in they are in previously unfamiliar locales.
3. Requisite equipment for power birders

Lister:
1. Joseph Lister, British surgeon and pioneer of antiseptic surgery
2 n. A birder who keeps track of their sightings, referred to as 'the list'.v. listing
3. A derisive term used by non listers who decry listers as only being interested in ticking off a sighting, and or being {too} competitive with respect to the number of bird they have seen. ie. an example of sour grapes.
4. see Chaser, Twitcher.

Listeria:
1. A bacterial genus containing seven species named after the pioneer of sterile surgery Joseph Lister.
2.  A serious infection caused by eating food contaminated with the bacteria AKA listeriosis.
3. An obsessive compulsive disorder prevalent in birders, marked by all manner of lists of birds. Ie. day lists, county lists, seen on TV lists, seen while on the toilet lists, etc.

LBJ:
1. Acronym for 'Little Brown Job'
2. A derisive term used for sparrows and peeps due to their lack of inspiring interest and difficulty in identifying them.

May Whore:
1. One who compromises their principles for sightings of migrating birds. “You called in sick to go see birds?” “Well, it would have killed me if I had not!”
2. The familiar face[s] one sees birding predominantly in May during migration.
3. A person who prefers birding during spring migration .
4.[From Spanish: Potoo de Mayo. ] “¿qué podía ser mejor que ser una potoo de mayo?”
“Juan, does Pedro feel better now that he has seen that wave of Warblers? Si senor, he is mejor”

NFB:
1. Acronym for 'Not a F***ing Bird'
2. The term used to describe something as unimportant, when the goal is to find target birds: {ie. on a whale watching trip} "What have they got over there? NFB."

Power Birding:
1. A mode of birding replete with intensity and passion and unafraid of using technology such as the internet and GPS.
2. Utilization of real time sighting intelligence that had its genesis with the advent of the internet. Initially it was with subscription to internet mailing lists that used listserve software. As more and more social media have evolved including Facebook, Twitter, and eBird, the wide spread dissemination of sighting information has progressed to the point where it is essentially instantaneous as well as ubiquitous.

Semper Aucupium!:
1. The motto of power birders everywhere.
2.  Latin: "always birding".
3. The observation ( or realization ) that no matter where you are, you will take notice of the birds around you; be they on TV, while eating at a restaurant, or while doing anything where a bird is reflexively noticed.

Tick:
1. A blood sucking arachnid that transmits several awful diseases.
2. The act of checking off a bird sighting, in other words, making a tick mark in a check box on a checklist.

Sour Grapes:
1. A reference to an attitude in which someone adopts a negative attitude to something because they cannot have it themselves.
2. An allusion to the Aesop's fable concerning the fox who, in an effort to save face, dismissed as sour those grapes he could not reach.

Twitcher:
1.  A person or thing that twitches.
2.  A short, sudden jerking or convulsive movement; usually elicited by news of a rarity.
3. British informal: a birdwatcher whose main aim is to collect sightings of rare birds.
4. See Chaser, Lister.

Birderer:
1. One who seeks out other birders while birding to glean timely local information. 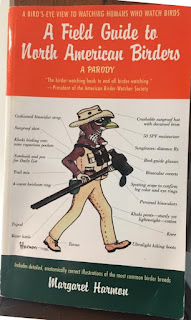 RainBirder:
1. One who seeks to disparage other birders by raining on their parade due to excessive consumption of sour grapes.
2. One who seeks out Burchell's Coucal for meteorological information
3. See Sour Grapes

Epic Journey:
1. An absurdly ( in the eyes of the uninitiated ) long trip taken in an attempt to see a bird; often eliciting "You did what?!" ( again, from the uninitiated ) but more common among serious birders than may be supposed.
2. A long road trip twitch during which one tries to squelch feelings of anxiety over the possibility that the target bird may not be there, and the resultant dreaded long sad trip home; AKA "Epic Fail"

Spaniótitatropism:
1. The tendency of a birder or birders to move their birding activity to the location of rarities.
2. See Twitching, Chasing, Listing

Big Year:
1. A birding 'game' where one  endeavors to see as many species within one calendar year with a location constraint. Typical constraints are location limitations such as world, ABA area, or state boundaries. Other limitations are "Green" ( see Green Birding )  or "Self-found".
2. A book and movie recounting one of the first big years.

Self-found Birding:
1. A manner of birding where priority is given to finding birds on your own: not chasing reports or even counting birds found by others. Rules for this can be found here

Insurance Tick:
1. A bird seen that currently is not necessarily countable, such as one that has not yet been accepted by the appropriate records committee because of provenance ( is it an escaped pet bird?),  ID concerns ( is it a hybrid ), or one which has the potential for being split in the foreseeable future.
2. See Arm-chair Tick.
3. See Just in case Twitching

Arm-chair Tick:
1. A bird added to one's life list by learning of a species that you have added to your life list because of a split of a subspecies into a full species. Being seated in an arm-chair is not required, but preferred.

Just In Case Twitching:
1. The act of going to look for a bird that you suspect  is a hybrid, escapee, or subspecies that is most likely uncountable.

Dipping:
1. Being unsuccessful in finding a bird you have twitched.

Patch Birding:
1. A mode of birding in which one devotes the vast majority of time at a local favorite place in hopes of becoming familiar with its rhythm of bird comings and goings

Refinder:
1. Pejorative term used to describe birders who chase ebird or RBA reports, instead of finding birds on their own.

Stringer:
1. One who strings.
2. A birder who reports multiple unlikely sightings of birds that no one else can find.
3. A cheater.

Drive of Shame:
1. The drive home the day following an evening's 'activities' possibly with a hangover,  when you are discovered to be wearing the same clothes as the day before.
2. The long solemn drive home after what should have been an epic journey, but you dipped on the bird.
3. See Epic Fail

Blocker:
1. A football player whose task it is to block for the ball carrier or kicker.
2. A substance that prevents or inhibits a given physiological function.
3. A rare bird that you have seen, but that is unlikely for others to get and catch up to you with.

Suppressor:
1. A device that partly or wholly eliminates electrical interference.
2. A person who withholds bird sighting information for the benefit of the bird, or simply to thwart other’s from seeing it.

Arie
I have been interested in the natural world from a young age. By fourth grade I had a collection of sea shells and butterflies. It has gotten much worse since then.